The Misfit Shine is a beauty to behold. Made with durable, premium materials including aircraft-grade aluminum, the Shine is a circular disc slightly larger than a stack of three quarters. At the launch party last night, Sonny Vu, Misfit Wearables Founder and CEO, described Misfit’s goal as “let’s make things that are incredibly wearable – let’s design something so appealing that people would want to wear it even if it was broken.” Bringing together a worldwide team (San Francisco, Vietnam, South Korea) of talented and determined engineers, designers and data research analysts, Misfit Wearables not only made a tracker that I would wear (for all occasions), but one that also motivates me to move more.

When people ask me which activity tracker is the best, I usually make the determination based on how wearable the device is and whether it changes my activity habits. The single most important component of health is the amount of activity done in a day and the consistency of daily workouts. Wearability means decreasing the amount of time the device has to be off my wrist – i.e. for charging and because of environmental changes. The Shine runs on a regular coin battery (good up to 4 months), is waterproof and is insanely comfortable and sexy – meaning that I don’t have any reason to take it off.

The Shine is simple and intuitive to use – which is a testament to the focus of the company. Instead of trying to jam every metric into the Shine, the device picks the basics: steps, calories and miles. You can set up specific event tracking as well (sleeping, cycling, swimming).

The original prototype had 16 small lights around the Shine face, which has been replaced with 12 larger white lights that are brighter, thanks to a change in the geometry of the holes made by micro-laser drills. 12 lights also lets the Shine tell time. 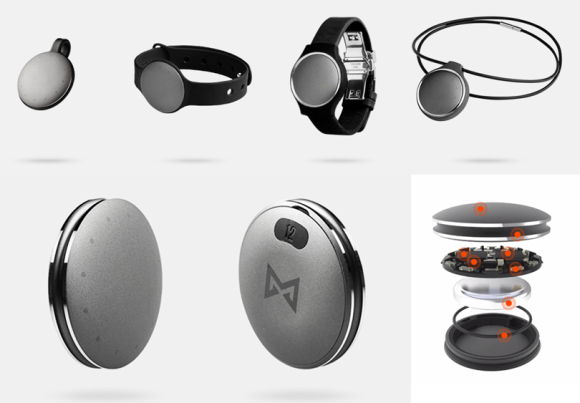 Such a small and beautiful wearable was a monumental task to design and build – some fascinating statistics described at the launch:

Using the Shine for an early morning run – I bumped up my daily step goal to 10,000 that afternoon.

Misfit is serious about data collection and sizing up the competition. Misfit will be opening up their API later in the year, which could lead to integration with other great fitness products and apps. The team is also working on new devices targeted to launch next year.

BioBeats has merged entertainment and healthcare into their first experimental app, Pulse. Experiment #2 is coming soon – BioMuse. While Pulse is fun – your heart beat drives the rhythm and force of the music, the main goal for BioBeats is to change the sensory settings around you to improve your health and/or entertainment factor. An example would be playing more upbeat music to make you run faster or changing the music to something slower when your heart rate reaches its peak. On the entertainment side, knowing how a person’s biometrics react to a scene in a movie could encourage movie producers to change the music/lighting to engage with the way a person feels. The company is “built on a cloud-based responsive platform designed to support the management of chronic conditions and general wellness,” so I’m sure they are working on clinical and hospital functioning apps as well. 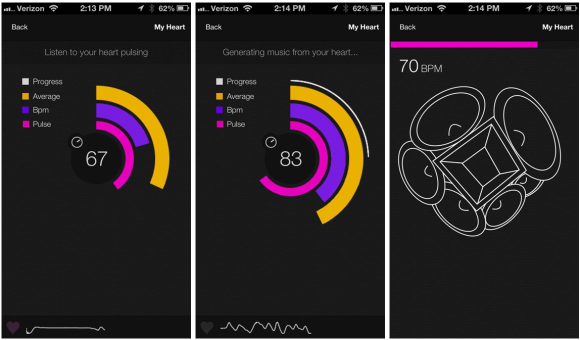 BioBeats and Far East Movement created an event that was powered by over 1.5 million heart beats, see the video they made below:

Turn Up The Love from BioBeats Inc. on Vimeo.

Glassomics is a newly launched medical glassware incubator, exploring and creating new ways to use glasses-like wearables in healthcare. With Google Glass growing in hype, it’s not surprising that Palomar Health and Qualcomm Life created Glassomics to innovate uses for glasswear and start discussions regarding security and liability concerns for such technologies. 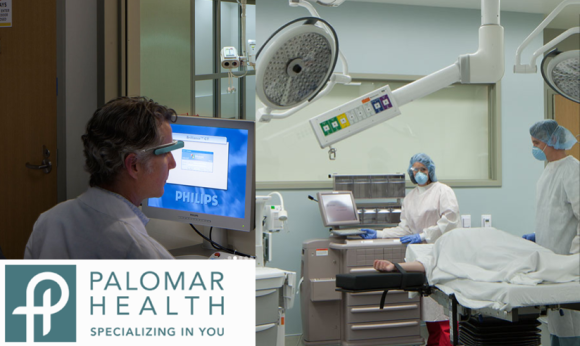 Sparseware, a San Diego based software engineering firm, will be leading the development of the initial glasswear prototypes and will test the technology at the new $1B Palomar Health, deemed the “Hospital of the Future.”

Glassware abilities (for hospitals) that I find most interesting are:

I look forward to the first round of healthcare applications for glasswear and will be following this closely.